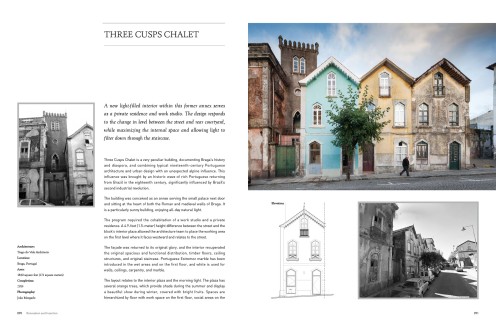 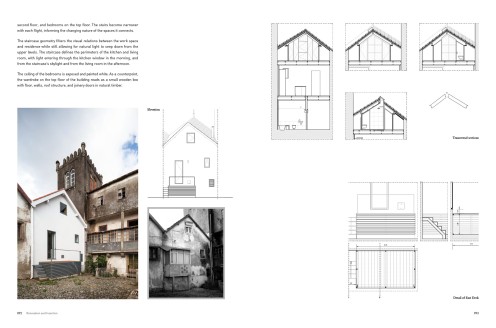 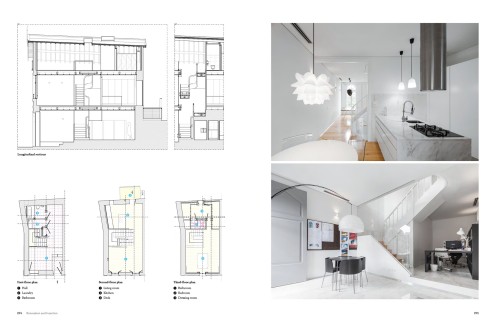 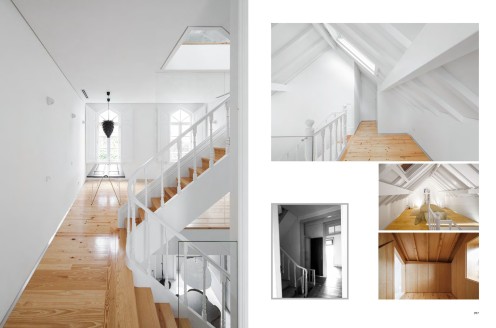 The Chalet’s façade has been sensitively renovated and its renewal could potentially serve as a catalyst for the adjacent two gables. A new light-filled interior responds to the level-change between the street and the plaza behind, while maximizing the internal space and allowing for the expression of the original internal roof structure.

Three Cusps Chalet is a very peculiar building, documenting the region’s history and diaspora, and combining typical nineteenth-century Portuguese architecture and urban design with an unexpected alpine influence. This influence was brought by a historic wave of rich Portuguese returning from Brazil in the eighteenth century, significantly influenced by Brazil’s second industrial revolution.

The building was conceived as an annex serving the small palace next door and sitting at the heart of both the Roman and medieval walls of Braga. It is a particularly sunny building, enjoying all-day natural light.

The program required the cohabitation of a work studio and a private residence. A 4.9-foot (1.5-meter) height difference between the street and the block’s interior plaza allowed the architecture team to place the working area on the first level where it faces westward and relates to the street.

The façade was returned to its original glory, and the interior recuperated the original spacious and functional distribution, timber floors, ceiling structures, and original staircase. Portuguese Estremoz marble has been introduced in the wet areas and on the first floor. and white is used for walls, ceilings, carpentry, and marble.

The layout relates to the interior plaza and the morning light. The plaza has several orange trees, which provide a shadow during the summer and display a beautiful show during winter, covered with bright fruits. Spaces are hierarchized by floor with workspace on the first floor, social areas on the second floor, and bedrooms at the top. The stairs become narrower with each flight, informing the changing nature of the spaces it connects.

The ceiling of the bedrooms is exposed and painted white. As a counterpoint, the wardrobe on the top level of the building reads as a small wooden box with floor, walls, roof structure, and joinery doors in natural timber.