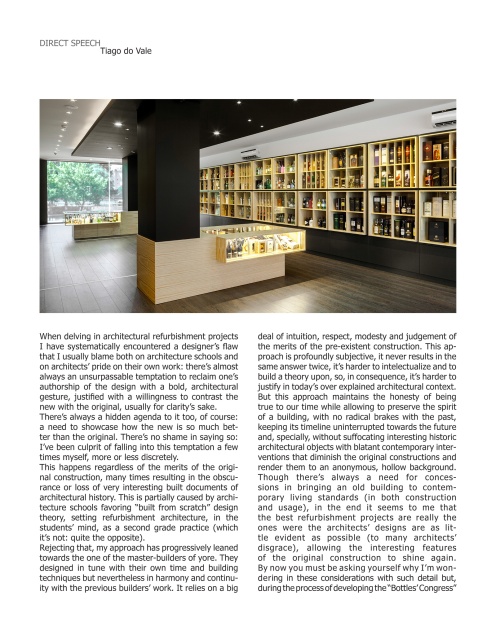 When delving in architectural refurbishment projects I have systematically encountered a designer’s flaw that I usually blame both on architecture schools and on architects’ pride on their own work: there’s almost always an unsurpassable temptation to reclaim one’s authorship of the design with a bold, architectural gesture, justified with a willingness to contrast the new with the original, usually for clarity’s sake.

There’s always a hidden agenda to it too, of course: a need to showcase how the new is so much better than the original. There’s no shame in saying so: I’ve been culprit of falling into this temptation a few times myself, more or less discretely.

This happens regardless of the merits of the original construction, many times resulting in the obscurance or loss of very interesting built documents of architectural history. This is partially caused by architecture schools favoring “built from scratch” design theory, setting refurbishment architecture, in the students’ mind, as a second grade practice (which it’s not: quite the opposite).

Rejecting that, my approach has progressively leaned towards the one of the master-builders of yore. They designed in tune with their own time and building techniques but nevertheless in harmony and continuity with the previous builders’ work. It relies on a big deal of intuition, respect, modesty and judgement of the merits of the pre-existent construction. This approach is profoundly subjective, it never results in the same answer twice, it’s harder to intelectualize and to build a theory upon, so, in consequence, it’s harder to justify in today’s over explained architectural context.

But this approach maintains the honesty of being true to our time while allowing to preserve the spirit of a building, with no radical brakes with the past, keeping its timeline uninterrupted towards the future and, specially, without suffocating interesting historic architectural objects with blatant contemporary interventions that diminish the original constructions and render them to an anonymous, hollow background.

Though there’s always a need for concessions in bringing an old building to contemporary living standards (in both construction and usage), in the end it seems to me that the best refurbishment projects are really the ones were the architects’ designs are as little evident as possible (to many architects’ disgrace), allowing the interesting features of the original construction to shine again.

By now you must be asking yourself why I’m wondering in these considerations with such detail but, during the process of developing the “Bottles’ Congress” project, I realized these lessons were useful to learn and apply in the context of retail architecture too.

The “Bottles’ Congress” project relied quite a lot on furniture design. Furniture design can be a formidable playground for architects, not only because furniture informs the quality and characteristics of a space as much as walls and other architectural features do (and it’s an aspect of architecture design that so many times falls out of the architect’s scope and control), but particularly because there can be so much intricacy, detail, exuberance and complexity in such a small, manageable object, making it a truly satisfying experience.

The thing is: retail architecture has to take second place to the product.

Just as a refurbishment project must not obfuscate the original building’s merits, retail architecture can’t remove the products from the limelight: in fact it has to put them precisely under it. It can’t be the star. It can’t compete with the product nor detract attention from it. Retail architecture should be simple, clear and perform its job down to a T. In a sense, it’s a type of architecture that has to disappear under its function.

That doesn’t mean retail architecture should be underdesigned or simplistic: though it takes a sidestep out of the limelight, it’s still defining the place’s character, informing of its value. It still has to be exquisitely designed as it still communicates the qualities and meanings of the space and the nature of the products.

That’s the intent behind the “Bottles’ Congress” project: a simple design presenting wine as if it was jewelry.

It’s not simplistic, nor fashionably minimalistic: it’s meant to be warm, depurated, speaking to the pine boxes wineries use for transport and display, fitted to each individual bottle, to each shape and size. It’s modular, per the client’s request, but also related to the unique characteristics of the place, bridging nature and city through its transparent core.

It may or may not be a “job well done”, but I’m certain, tough, that good architecture doesn’t always have to shout. In fact, I happen to suspect that most of the best architecture always ends up to be discreetly quiet. Even if it doesn’t make it to the magazine covers. 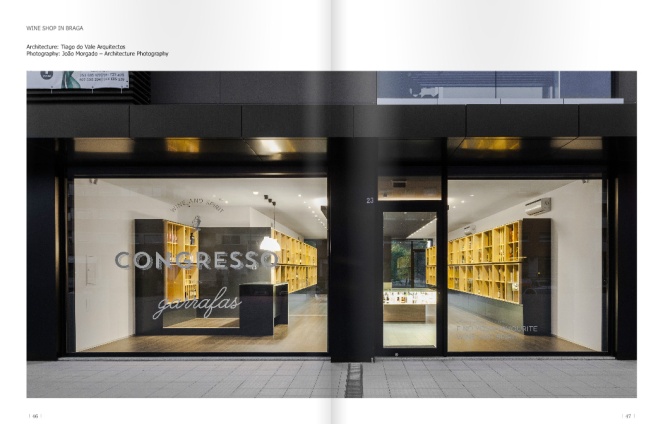 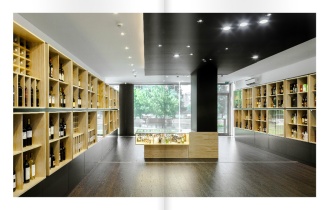